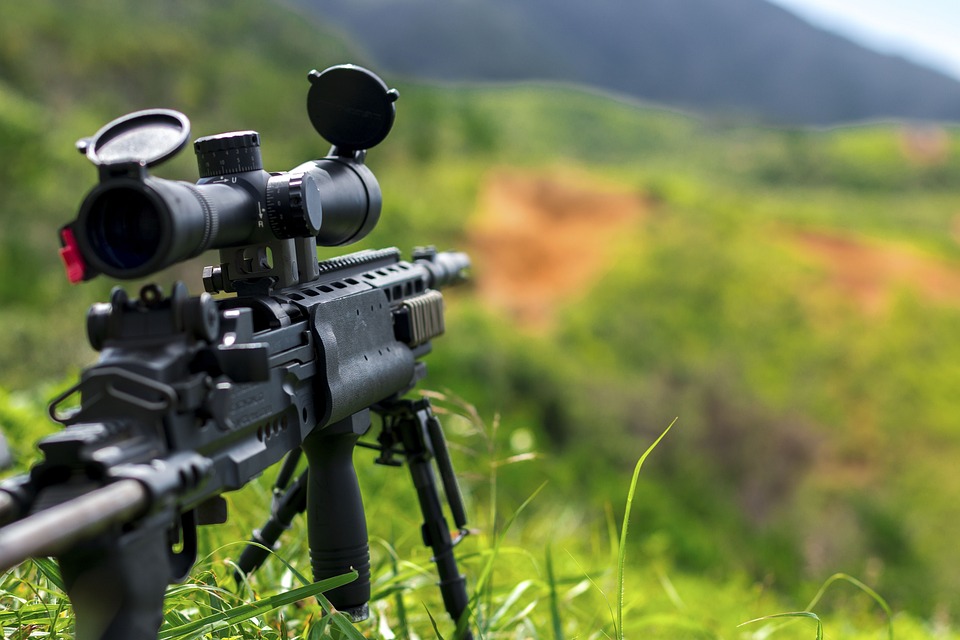 If you’re thinking of adding an air rifle to your arsenal, you might have come across the Gamo Varmint. But before you buy, you need to know how effective this weapon can be and if it’s worth your investment. In this Game Varmint review, we’ll cover everything from the Gamo specs to its performance and how it compares to the competition.

By the end, you’ll have all the information you need to decide if the Gamo Varmint is right for you.

What Is the Gamo Varmint? 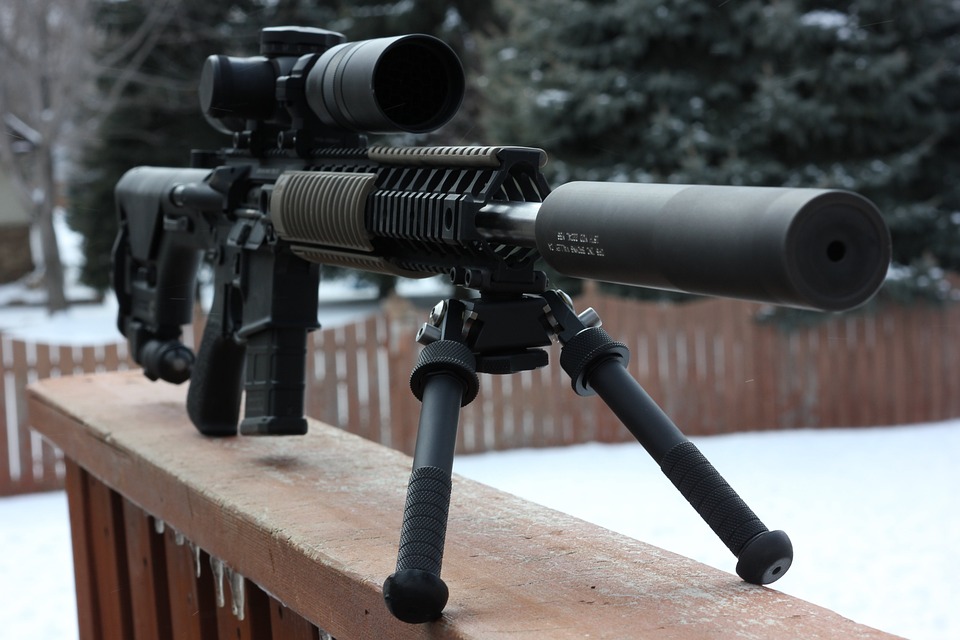 Gamo is a Spanish company founded in the 1800s. They produced air pellets for several decades before they began making air rifles in 1961. Once they stepped into the industry, they quickly became known and respected for making some of the most powerful, quiet, and precise air rifles on the market. That reputation for quality continues to this day.

This Gamo Varmint review begins with our featured product, the Gamo Varmint, also called the Varmint Hunter. The rifle affords all-weather durability without sacrifice to maximum performance. It has a comfortable light weight to prevent arm fatigue during longer hunts that is made possible by its synthetic stock.

The weapon has a match grade fluted polymer bull barrel and 1200 fps with PBA making it the ideal choice for hunting small game. It is also useful for pest control and target practice. Its accuracy is reliable in both day and nighttime conditions.2 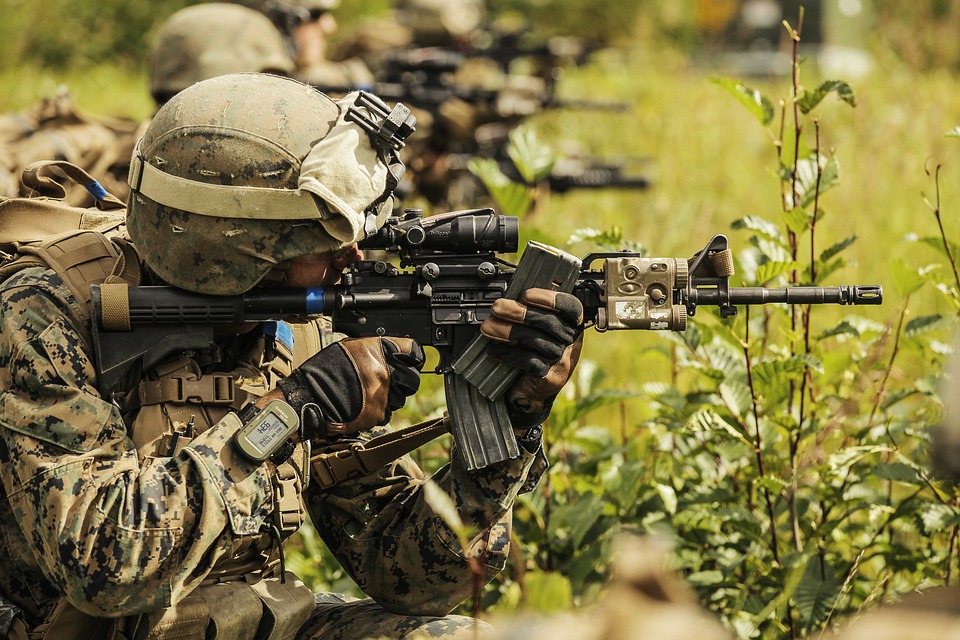 This would not be a proper Gamo Varmint review without addressing the rifle’s specs, so let’s dig in. As mentioned before, this is an all-weather rifle. It is outfitted with a 4x32mm scope, a laser sight, and an exceptionally bright flashlight. The weapon is able to fire .177 caliber lead pellets at an impressive 1,000 feet per second. Even more amazing is that it can fire .177 performance ballistic alloy ammo, or PBA, at a speed of 1,200 feet per second. Without a doubt, the Gamo Varmint is a powerful air rifle.

It has a spring piston powerplant. The weapon’s Monte Carlo stock has a raised cheek piece on both sides, making it ideal for people who are right and left-handed. There is also a two-stage adjustable trigger outfitted with a manual safety. With regard to the rifle’s cocking effort, it is 30lbs.

Keep this in mind

If you have children who hunt we do not advise this weapon for them. Outside of needing a great amount of cocking strength, the rifle is too powerful for a child.

As far as safety features go, it has an anti-bear-trap safety mechanism to help ensure your fingers are not injured when cocking the rifle. We like that the butt-stop is made of ventilated rubber because the material absorbs recoil well. Speaking of practical features, the checkering anti-slip design applied to the grip and forearm is a nice touch.

How the Gamo Varmint Review Compares​

We picked a few similar products available on the market to see how they compare.

This rifle is very easy to use. It is comfortable and lightweight; however, it does take a bit of force to cock.

We find this rifle to be very powerful for its price range. It is also highly accurate.

We are pretty impressed with the overall design of this rifle. The barrel is made of a fluted polymer jacketed steel. The trigger is fashioned to be second stage adjustable and there is a manual safety and automatic cocking safety system. Another design feature worth mentioning is the ultra-thin cheek pad.

It is molded on each side, making the rifle ideal for both left-handed people and right-handed people. Last but not least, the grip and forearm provide secure handling thanks to their checkered patterned non-slip texture design. 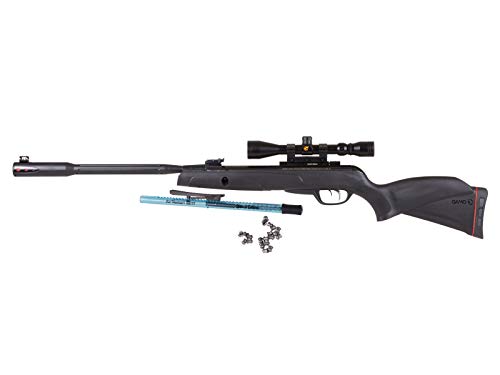 The Gamo Whisper is one of the most robust rifles on our Gamo Varmint review. This model’s weight and balance are very close to perfect. Getting on target for a shot can be done with ease, something especially useful in live hunting situations.

The Recoil Reducing Rail system has a unique design. Unlike most other air rifles that have grooves for mounting the scope rings, which makes tightening the down rings difficult, Gamo has eliminated that problem. The Whisper uses a 5-screw-mounted rail in a “Picatinny style.” It has two pieces separated by polymer struts so the recoil-stress on the riflescope’s internal components is nearly undetectable.

Also, the Shock Wave Absorber recoil pad is well made and highly effective. This feature stands out because it is common for air guns not include recoil pads that are effective. Basic molded rubber over the buttstock is often dubbed a “recoil pad” despite the fact that it really does not do anything. As far as sound, Gamo has been hailed widely for its Whisper Fusion technology. Whisper Fusion is designed to mitigate the “twang” caused by the spring that powers the rifle. This is impressive since without it the Whisper Fusion rifles would be nearly as loud as a .22 caliber rimfire.

The trigger on this airgun is adjustable. Gamo has dubbed it the Custom Action Trigger. It enables you to adjust the first and second stage of the trigger. Out of the box, the weapon has a trigger pull set to 2.25 pounds. Digging further into the specs, the rifle is a single shot with a single cocking system break barrel and velocity of 1020 feet per second. It also has PBA Platinum and, as mentioned before, a manual safety. The 33 mm cylinder uses Inert Gas Technology Mach 1 power plant and the steel barrel is jacketed with fluted polymer.

The weapon’s full cocking effort is 32 pounds. It comes with a fiber optics front sight with hood and an adjustable fiber optic rear sight. It is suitable for use in all weathers and is ambidextrous in its design. The total weight is only 6.47 pounds with a length of 43.3 inches, 17.8 inches of that being pure barrel.

And that’s not all

This rifle is very shooter friendly and easy to use.

When used for recreational use and pest control, this rifle is very accurate. It has higher energy downrange during hunting and supports higher impact and penetration. Even for target practice and competition, it hits the mark. Overall, we feel the performance of this weapon is solid.

The design on the Whisper is exceptional. It is perfect for stealthy hunting and has accurate shot placement. The rifle is ultra-quiet. The 3-9×40 scope is something hunters can appreciate, and we love the fusion of so many of the diverse, effective, and advanced technologies Gamo has to offer all in one weapon.

Its double-integrated noise dampener is beyond impressive in its ability to reduce report by 89.5 percent. The rifle’s velocity and terminal strength are increased by its IGT Mach 1 power plant. We also like how the sound moderator lets pellets travel through two D chambers. The chambers work together to compress and prevent noise expansion.

Another design feature we like is the Inert Gas Technology. It has replaced Gamo’s more conventional spring power plant with a 33-millimeter pneumatic cylinder. The new design delivers consistent pressure when cocked, propelling a .177 PBA pellet at 1,420 fps and a .22 PBS pellet as quickly as 1,020 fps. All that said, please note that cocking a new break barrel action gun can be hard initially. If you break it open, and half-cock the gun 10-15 times it will loosen it up.

This rifle has a five-year warranty.

The Raptor Whisper air rifle is a model that has been out for a while. It is such a favorite with hunters that an impressive range of derivatives have been formed around its original design. While this model is worth a look, note that it is not equally accurate with a wide range of pellets. That said, it is light and easy to aim.

As with most Gamos, the patented Whisper noise reduction technology is the standout feature of this air gun. Past that, it has a Caliber of .177 or .022, a speed of up to 1,300 fps, and sight scope of 4×32. The body is sturdy and suited for all weather and the smooth trigger action provides better accuracy and cocking with less vibration. It can be used for large and small game hunting.

This is a bare-bones rifle that is very easy to use.

The rifle has good velocity at a lower caliber, but lacks in the higher caliber option. Still, it is ideal for large and small game.

We love Gamo’s patented noise reduction and smooth trigger action. The fixed magnification scope is hard to get past, but it is the reason this rifle is so affordable. We also are not thrilled with its single action.

The Gamo Wildcat Whisper Air Rifle uses an IGT piston that launches pellets quickly and consistently. This model has very smooth cocking, and although it is suitable for all weather, it really shines in colder climates. Speed-wise, you can expect 1,350 fps in .177 caliber and 975 fps in .22. We feel this air gun is best for small game hunting and pest control. Lastly, we love Whisper Technology and the inclusion of a 4×32 scope.

This may be the most easy-to-use rifle on our Gamo Varmint review.

The rifle performs well when used as intended, on pests and small game.

This air gun is one of Gamo’s more bare-bones models, but it has all the most necessary design features. For the price and intended hunting specs we feel it is designed well.

How to Break In a Rifle Barrel Like a Pro